Americans want to know what’s going on. They need to know what’s going on. They don’t want to spend a whole lot of time finding out. The latest polls show most of the nation no longer trusts the news media. And there are too many people, groups, and corporations who are invested in keeping the current state of the American media exactly where it is. The most efficient and effective solution is a fast flanking move which replaces the primary function of the news media with a new online information-delivery system run in a transparent and non-partisan manner.

The idea comes from the way well-informed people get their news these days. They don’t watch TV news - it’s too slow and unreliable. They tend to follow a small number of Twitter feeds that have proven reliable in delivering facts. And then follow links posted on these feeds to on-the-scene video and reporting. Or to documents just being released.

The system will be built for distributed, collaborative reporting. The “editors” could be anywhere, as could be the “reporters”. Content will flow in from reporters and the story manager would decide in real-time what gets published.

There will be three kinds of articles:

Below is a mock-up of a ‘Stream’ article using the working framework as a foundation to demonstrate how such a presentation would look to users. Imagine that when an important event happens you could turn to a source like this for information: 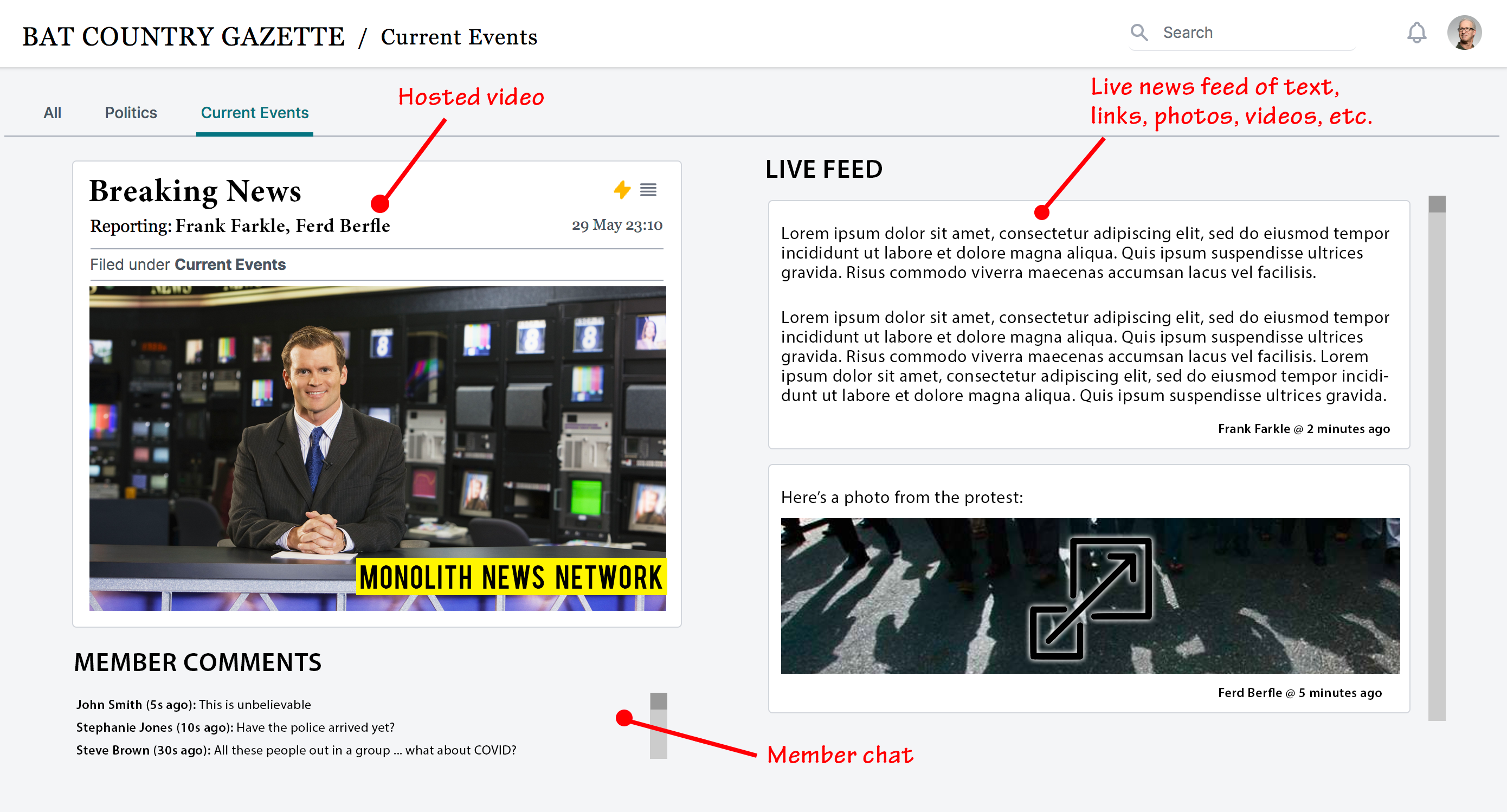 Such an article can be spun up almost instantaneously. As soon as the team is ready they can begin broadcasting commentary and content. Once the stream is over, it can be annotated and extended with more commentary and supporting media, and then be flipped into a more permanent ‘Story’ type of Article. This preserves the value and context of the live reporting, and lets it be filled out into a more traditional news story with the minimum of effort. This makes the virtual newsroom even more efficient.

How It Will Work …

The system is built around a central “Article” model, with “Sections” and “Mastheads” above that. This allows a publication to be structured and produced. Each Masthead will be theme-able for colors and typography, allowing publishers to have the look they want.

Articles will be composed of “Fragments” and be presented either linearly (for a Stream) or as traditional newspaper style columns and blocks (which will be condensed to a linear column on mobile devices). Unlike traditional news and blog publishing system, Monolith will be able to handle real-time, asynchronous addition of new Fragments to an Article. This allows multiple authors to update a story in real-time as new information becomes available. If an Editorial Mode is enabled, new Fragments will not be published to the general public until one of the Article Editors approves it.

In addition to static content, a Stream Article will also support live video. This can be a reporter shooting footage of and event or a segment announcer who is describing and analyzing what it coming across the stream (i.e. a “hosted article stream”). This allows Monolith to provide the engagement one gets with a hosted news program combined with the responsiveness of a collaborative, distributed news publishing system.

Fragments themselves can be text, links, audio, video, and images. They can also be augmentations such as “corrections” (which are associated with another fragment which has been shown to be erroneous) or “references” (which provide additional facts to enrich or back up a story). Augmentations allows for three phases of journalism to be happening at once, in real time: a stream host explaining events, multiple reporters gathering facts on the scene or at related scenes, and fact-checkers and researchers providing links to detailed information pertinent to what is being covered.

Once a Stream Article is over (i.e. the event being covered has ended), the content can be sorted, pruned, and have descriptive text interleaved between media and links to yield a traditional Story Article about what happened. This ability to essentially re-use live content in-place to create a more concise and informative reading experience saves time and effort for the staff, while still yielding a superior work product.

An inboard/message chat system (based on Wingate) is is available to allow staff to interact within the system as they work on an Article. For Streams, this would allow field reporters and people in the main editorial office to communicate. For static Articles, this would allow contributors to exchange notes as work progressed.

The system is built on Ruby on Rails and uses a mobile-first responsive UI toolkit. Commenting on content can be done either through connecting to an external commenting service (such as Disqus), or there will be a connection possible to a private Wingate instance for the publication.